José Antonio is one of the oldest employees of the foundation. Born in Puerto Plata during the last years of Trujillo’s dictatorship, he seems to have kept his morale high. His eternal smile is even brighter when he talks about his meeting with Jaclyn and « her » boys at the beach of Boca Chica. This was at the time of the first ENED generations; « boys had tough fights, » jokes José Antonio, mimicking some boxing movements. He was simply playing guitar at the beach, but his aura, talent and good humor drew the attention of the mother of the « flock ».

They got along well quickly, and some children have become good at playing the guitar. José Antonio is the eldest of a family of thirteen children and he is now himself a father of four boys. Being a native of Puerto Plata, he immediately welcomed the newcomers as members of his own family. 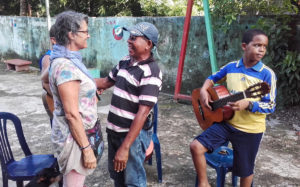 After some training, « Pancho » (Samuel) and Oliver, who were two of his first students, became a promising duo playing guitar and singing with their melodious voices. José Antonio, being sixty, has not changed much and continues to live his music. He performs four nights a week in a hotel in Boca Chica and teaches young people in several parishes. Of course, he continues to go twice a week to ENED, with his guitar and his joy of life.

It is therefore natural that Jaclyn, who never fails to bring thousands of gifts in her luggage from Switzerland, thought of José Antonio when a friend offered her a guitar. The instrument is almost new and is in good shape; even too good for the young boys of Casa 1, who might not be delicate enough with an instrument despite their good intentions…

This guitar would be perfect for Jose Antonio, because playing guitar not only helps him to support his family, but it is a pure passion for him. He is passionate about music, and he takes great pleasure in sharing with his wife as well as with their children. Presented with this precious instrument, he was both surprised and delighted, and he immediately played some notes with a big smile. Of course, Jose Antonio’s old guitar was given to the ENED boys.